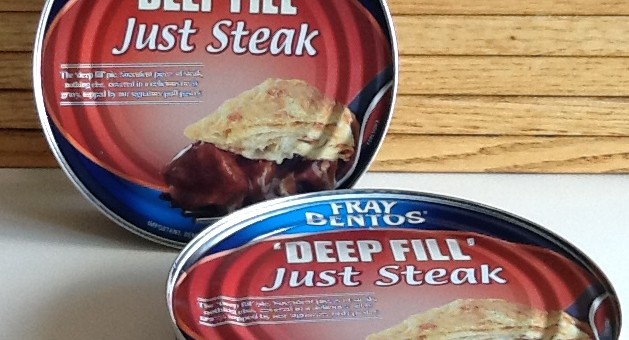 Have you noticed that many things just seem to appear at times?  Like out of thin air appear, sometimes after years of longing and yearning and wanting … it appears?  Here is a story of just that…..

You already know I have studied at the Arthur Findlay College of Spiritual Development in Standsted England. Of course during those events I have made some friends and discovered I have a love of all things England. I mean all things, I love the Ale, the food, the accent, the flowers, the history and especially the cute little houses that dot the countryside and line the streets of the towns. I love Downton Abbey, Julie Andrews, the Royal Family and even the daft soap Coronation Street.

I moved out of my small hometown in Northern BC Canada, to work in another community.   I had never really learned how to manage money. So I was always broke after paying my personal bills. Grocery shopping had me searching for inexpensive foods and that is when I discovered THE PIE. The Beefsteak and Kidney pie in a tin.

My first taste was love at first sight. I stocked up on tinned Beefsteak and Kidney Pie. To me it was an inexpensive meal of champions.

Time passed, I moved across the Rockies to Alberta. I forgot for a time about THE PIE. Until around fifteen years later in the late 80’s. I thought about the tinned PIE, and I wondered if they still made them. I wanted to share them with my boys and see if they liked them too. And I searched for another fifteen to twenty years. No luck. This time though, I mourned the loss of the PIE.

I am visiting my very talented British friend Liz who owns Uthologie in Red Deer and is treating me with her Venus Freeze system that helps reverse the signs of aging naturally without injections etc.. After the treatment as we chatted, I shared a comment another English friend still in England posted on her Face Book page. She had mentioned Fray Bentos Pies, and  I asked Liz what they were.

Liz was immediately excited and ran to her kitchen. She came back to the treatment room and handed me what she openly declared as the best pie on the planet – a tinned pie. My PIE. The PIE from over 40 years ago. I was stunned. But even more stunned when she quickly dialed her mom and asked her to bring a couple more pies when she came in two weeks to visit from England. Pies for me.  MAGIC.  How English pies ended up so long ago in the little BC town, I will never know; but how excited am I to find them again!

Synchronicity. I can’t say it often enough, the Universe is divine and organized and planned. My friend Liz is helping me get camera ready for some heavy video shooting we have coming up. She is British, I study in England. I study to be the best that I can be. This year promises to be the most intense year yet; so far it has been the busiest. And the divine Universe has rewarded me with my long lost PIE.

The Universes way of saying, “Good job Sharyn, really well done; keep up the good work. I am here, I have your back; and I love you!”  And to Liz, “You have integrity and kindness.  And I love you.  Well done with Uthologie and I have your back too!”

How blessed are we! Until next time…. Namaste from Sharyn